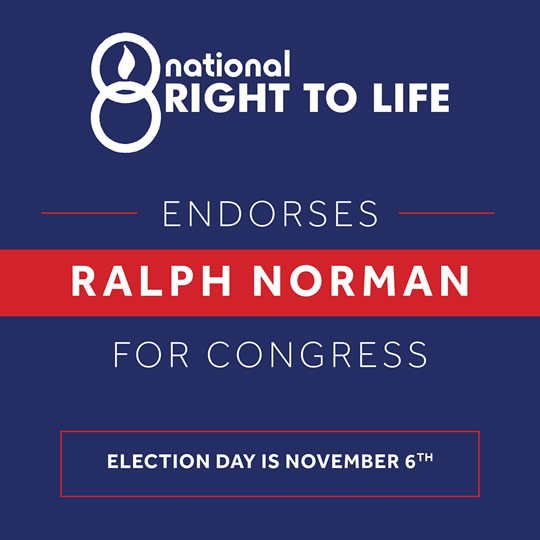 Rock Hill, SC – The National Right to Life Committee (NRLC) has endorsed Ralph Norman for the November 6, 2018 election for South Carolina’s Fifth Congressional District.  In a written letter, NRLC leadership commended Mr. Norman on his “perfect 100 percent pro-life voting record” during his time in the 115th Congress.  The letter continued, “Voters who are concerned with the right to life and with the protection of the most vulnerable members of the human family should vote to return you to Congress, so that you can continue to work to advance vital pro-life public policies.”

In response to the National Right to Life Committee’s endorsement, Ralph Norman issued the following statement:

“The National Right to Life Committee (NRLC) was founded in 1967 and is our country’s largest pro-life organization. Its mission is to “protect and defend the most fundamental right of humankind: the right to life of every innocent human being.

“During last year’s special election, I was honored to receive a major endorsement from NRLC for my pro-life beliefs. Since taking office 14 months ago, my votes in Congress have continued to reflect the values of this great organization and the pro-life community at large.

“My views on abortion stand in direct contrast to those of my opponent. And so I am proud to once again announce that I have been endorsed by National Right to Life for this coming election.

“My hope for this nation is that we seek to embrace the sanctity of life, and I am grateful for the support of the National Right to Life Committee and its membership as we march, together, towards November 6th.”