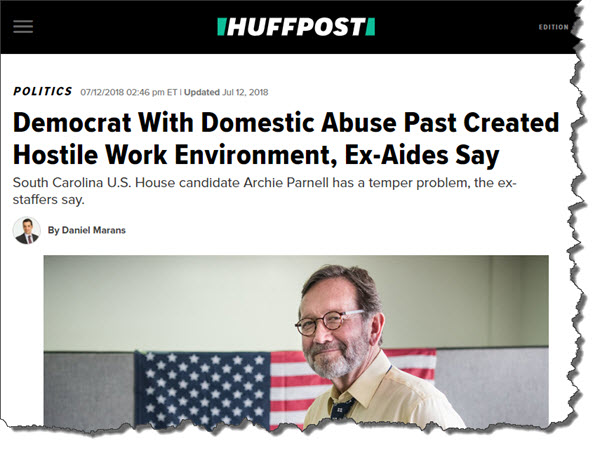 After an extended period of silence, Mr. Parnell reemerged and assured us that he was “not the same person” today as the person who brutally beat his ex-wife wife years ago, despite the steps he took in the present to conceal that history while running for Congress.

Yet now we have a new report.  This one from the Huffington Post – which is certainly no friend to Republicans – that outlines Mr. Parnell’s present-day abuse of his own campaign staff.

These are people that knew Mr. Parnell better than any donor, supporter, or voter.  These were people who willingly gave their time and talents to try to help him.

And these are people who came away from that experience describing his personality as “violent and belligerent” and “plagued by a hair-trigger temper that occasionally caused them to fear for their physical safety.”

Whether physical or verbal, abuse is a cowardly attempt to manipulate others. We’ve already been through almost eight weeks of news about Mr. Parnell’s domestic violence.  And now here we are again, with fresh headlines about the way he abused his own campaign staff.

Archie: if that’s how you treat those who are closest to you… if this is how you react when under the slightest bit of frustration or adversity… you are unfit for elected office.